The banknote will enter circulation on 23 June, which would have been the mathematician's birthday 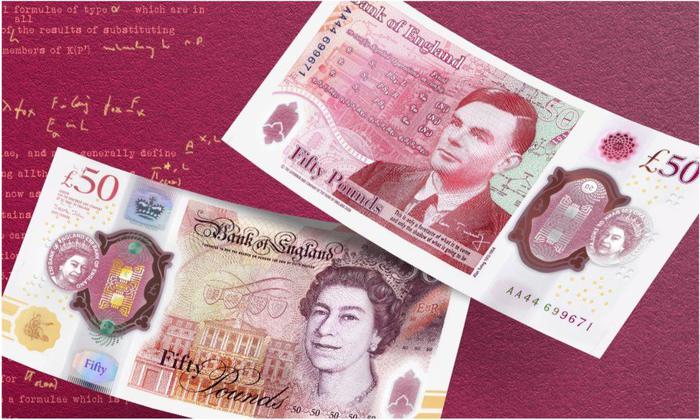 The work of Alan Turing helped accelerate Allied efforts during World War Two by helping to crack the Enigma code at Bletchley Park. His work is said to have been key to shortening World War Two and saving lives.

After World War Two, he was involved in the pioneering development of modern computers, first at the National Physical Laboratory and later at The University of Manchester.

In 2013, he was given a posthumous royal pardon for his 1952 conviction for indecency over his relationship with another man. He had been forced to take female hormones as an alternative to prison. He died at the age of 41 from cyanide poisoning. An inquest recorded his death as suicide.

Andrew Bailey, the Governor of the Bank of England, said: "He was a leading mathematician, developmental biologist, and a pioneer in the field of computer science.

"He was also gay, and was treated appallingly as a result. By placing him on our new polymer £50 banknote, we are celebrating his achievements, and the values he symbolises."

The Bank is flying the rainbow flag above its Threadneedle Street building in London to mark the occasion.

The design of the bank note features a photo of Turing taken in 1951, three years before his death, plus his signature, ticker-tape depicting his birth date in binary code, and a quote from an interview that he gave: “This is only a foretaste of what is to come, and only the shadow of what is going to be.”