SEED technicians use their skills to support PPE supply 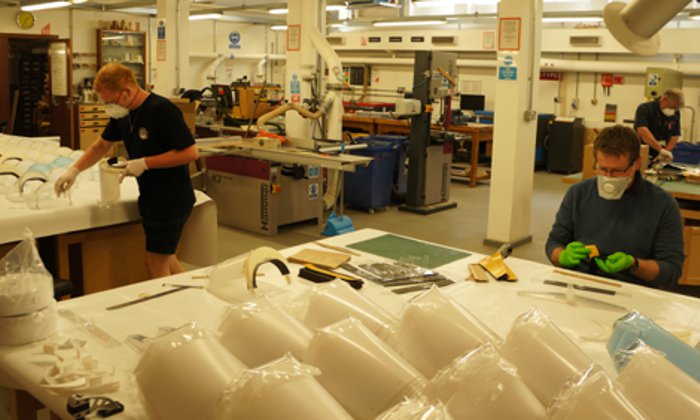 The B15 Model Making Workshop in the Manchester School of Architecture is usually a hive of activity during term-time, but with the closure of non-essential facilities on campus, the workshop team is producing PPE visors for the Manchester University NHS Foundation Trust (MFT).

A team of three technicians, Scott Miller, James Backhouse and Saul Parker-Backhouse, spotted the opportunity to use their creative skills by designing and producing 3D printed visors using workshop equipment. Once they built a prototype visor (based on a free design by PRUSA), it was sent over to Professor Peter Clayton, Deputy Dean of the Faculty of Biology, Medicine and Health, who worked with MFT's infection control department to test its durability for repeat decontamination. A key issue was identified with the design; a space between the headband support and visor screen, leaving NHS workers at risk of infection.

It was the fast thinking of Yu Zheng Tan, a final year Masters student who works with the team as a teaching assistant, who solved the problem. Scott says: “By using his 3D modelling skills and 3D printer, Yu designed an additional piece which would seal the gap, and produced two prototypes visors for testing without interrupting our ongoing print runs.”

Visor production has been a huge team effort from colleagues across the University. To get the project off the ground, Estates and Kay Hodgson, SEED Head of School Operations, worked quickly to ensure Scott and the team had campus access and the permissions they urgently needed. The technicians have been working in shifts, in between online teaching and personal responsibilities.

To assemble, box and deliver the visors, the team has organised a series of special assembly days, recruiting technical staff from Manchester Museum to lend a hand.  As Jim explains: “The assembly days are a really great chance for everyone to come together in a joint effort to get the visors finished – observing social distancing and wearing PPE gear of course!”

The team are delighted that their first set of visors are now in use at MFT and are now working on creative ways to increase production, such as sourcing 3D printers from other departments. As Scott says: “It’s been a case of making what we can with what we have, we’re always encouraging our students to get creative and be resourceful.

“We’ve demonstrated that ourselves by putting our resources, contacts and practical skills to use in this difficult time.”