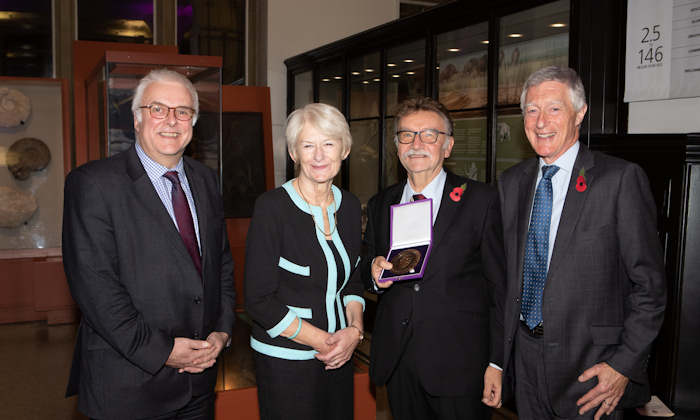 The University has honoured Emeritus Professor Tony Redmond, a world-leading specialist in emergency medicine, with its highest Medal, the Medal of Honour.

In 1994 he established and is now Chair of UK-Med, an NGO that provides international emergency humanitarian medical assistance to countries affected by conflict and sudden onset disasters. UK-Med is housed within HCRI and the two work closely together.

He was awarded the Soviet Order for Personal Courage for work in the aftermath of the earthquake in Armenia and an OBE for humanitarian assistance to Sarajevo.

Tony is married to Caroline, who was a fellow student at The University of Manchester. They have three children, Katy, Sarah and Helen, and three grandchildren, Thea, Oliver and Rosa.

The photo shows Interim Vice-President and Dean of the Faculty of Biology, Medicine and Health, Professor Peter Clayton, the President and Vice-Chancellor, Professor Dame Nancy Rothwell,  Medal of Honour recipient Emeritus Professor Tony Redmond and the Deputy Chair of the Board of Governors, Dr John Stageman.