Artwork to be reinstated on completion of Graphene Engineering Innovation Centre 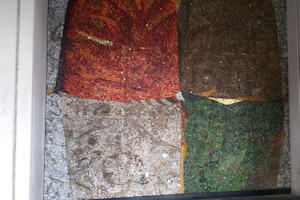 Works continue with the preparation for the construction of the new £60 million Graphene Engineering Innovation Centre (GEIC) and the demolition of the Faraday Undergraduate Building and link bridge on the North Campus.

The mosaic, `The Alchemist’s Elements’, in the entrance colonnade, has now been safely removed from the building and are being stored securely on campus until the building works are complete.

On completion of the GEIC in late 2017, the 4.5m x 3m artworks will be permanently reinstated within the site for visitors to enjoy for years to come.

The mosaics were created by Hans Tisdall a German-born artist, illustrator and designer with a distinguished career in 20th century Britain.  Following the Second World War, Tisdall became involved in the revival of public artworks within many educational and industrial buildings - one of which included the Faraday Building at UMIST.

Further updates on the work and any impact on the campus will be provided.