Dr Thomas Cocolios, a research fellow in the School of Physics and Astronomy, made it to the final of last week’s 'I’m A Scientist, Get Me Out of Here!' 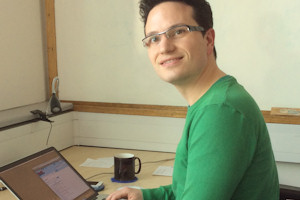 The online competition, which runs three times a year, sees scientists in 13 themed ‘zones’ answering questions from secondary school pupils. Each day features a fast-paced live online chat with a school class, and then an eviction, as pupils vote for their favourite of the five scientists in their zone. At the end of the week, the final winner in each zone is awarded £500 to spend on a public engagement project of their choice.

Thomas was part of the Nuclear Zone, where 300 students bombarded the scientists with questions on everything from the sounds made by neutrons to the meaning of life itself. He planned on spending the £500 winnings on making a giant LEGO chart of the nuclides, but although he survived three evictions he lost the final head-to-head to Dr Clara Nellist, a Manchester graduate who’s now working at CERN.

Thomas said: “This was an amazing experience. The format was very engaging and the questions came from every direction and every angle of nuclear physics, so I really had to be sharp about it too.

“It’s a shame that I did not win in the end, but I’m happy to have gotten to the final round alongside Clara, an alumnus from The University of Manchester too!

“And now, I definitely need to find a sponsor for those LEGO pieces and keep our School’s LEGO tradition going!”

See the questions Thomas and Clara answered, and apply to take part in the next event, at: