Devolved Vision: Granada TV and the Future of British TV

On 18 May 2022, to celebrate the launch of the British Pop Archive, Creative Manchester will be hosting a roundtable discussion with David Olusoga OBE and broadcasting vanguards to explore the past, present, and future landscape of British TV 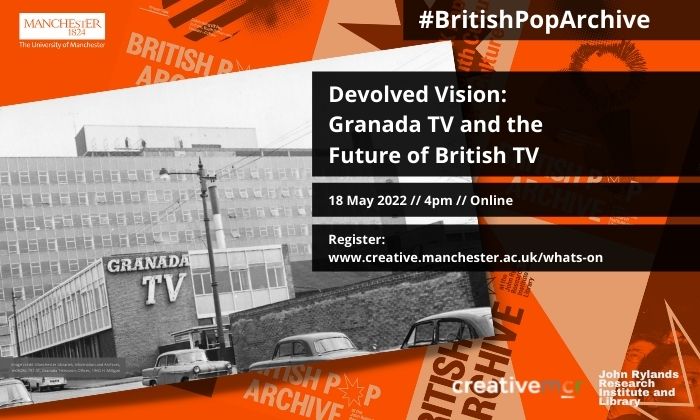 The British Pop Archive is a national collection dedicated to the preservation and research of popular culture. It is the first specifically designated, large-scale popular culture archive in the UK. The collection's launch will be supported with a major exhibition at the John Rylands Research Institute and Library, featuring iconic items from the Manchester pop culture scene. The exhibition opens on the 19 May 2022. This national archive is the first specifically designated, large-scale popular archive in the UK, an excellent resource for research and teaching and a boost to Manchester’s status as a creative and cultural capital.

As part of British Pop Archive, the Rylands will welcome the return to Manchester of the Granada TV Archive. Granada TV holds a significant place in the history of British television, and was once referred to as the ‘greatest television company in the world.’ Audiences might be familiar with Granada TV for creating trail-blazing programmes, including Coronation Street, Sherlock Holmes, and The Royle Family. With the changing landscape of television – the rise of the Big Five TV channels, streaming services, and social media platforms – Granada TV’s identity has drastically altered over time.

To mark both the launch of the British Pop Archive exhibition and the return of the Granada TV Archive, Creative Manchester will be hosting the event ‘Devolved Vision: Granada TV and the Future of British TV.’ This is a roundtable discussion with leading experts, reflecting on Granada TV, the current landscape of television, and what the future of British TV will might look like.

The roundtable, chaired by Professor Hannah Barker, will feature the following notables:

The event will be in-person and accessible via live-stream

You can register via Eventbrite for the FREE event, taking place on 18 May 2022 at 4pm

Find out further information on the British Pop Archive