Some foreign medical teams need to improve the way they respond to future disasters, according to an analysis of the devastating January 2010 Haiti earthquake. 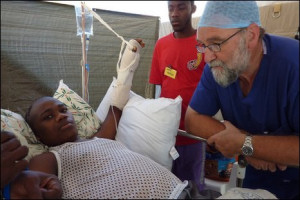 Better medical record keeping and protocols that link surgical services with rehabilitation services are needed, according to researchers from The University of Manchester’s Humanitarian Conflict Response Institute (HCRI).

The report, published in the journal Prehospital and Disaster Medicine, makes several recommendations to improve the medical emergency response to earthquakes and future disasters.

HCRI Deputy Director Professor Tony Redmond, who led the research, said: “Patients, sometimes had no way of finding out the name of their doctor.

“Health care workers who turn up uninvited in another country are obviously not registered to practice there and if they do treat patients, we have to find ways of making them accountable to those patients and the local authorities.”

Essential follow up referrals to other medical specialists and prosthetics experts did not always happen, the report also finds.

He said: “Lessons must be learned by the international community to ensure that, just as at home, only regulated health care workers are allowed to practice in future disasters.

“Because record keeping by some was minimal or non-existent, there was no way of knowing if proper standards of care were followed.

“In the UK, we have the International Emergency Trauma Register to ensure that those wishing to volunteer in the future are accountable and trained.”

An estimated 220,000 people died, 300,000 were injured and 105,000 houses destroyed in the disaster that struck the capital Port-au-Prince, according to Disasters Emergency Committee figures.

The destruction of government infrastructure and loss of 250 United Nations staff made checks on people entering the disaster zone more difficult.

Professor Redmond has been leading British medical response teams in disaster zones since 1988.

He currently chairs the Foreign Medical Teams Working Group of the World Health Organisation that is working with the NGO community to ensure the highest standard of care from those who respond to sudden onset disasters in another country.