Five songs written by renowned author Anthony Burgess from his 1969 screenplay of "A Clockwork Orange" have been performed for the first time at The University of Manchester. 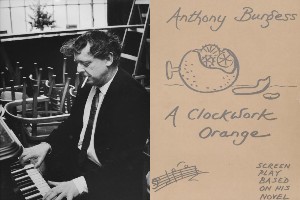 The lyrics have been set to music by Dr Kevin Malone, Head of Composition at The University’s Music Department ahead of the novel’s fiftieth anniversary next year.

Dr Malone was invited to compose the music by the International Anthony Burgess Foundation, which owns the rights to Burgess’s novels and music.

The world premiere of "A Clockwork Operetta" was performed by all-female ensemble the Ebb Trio, dressed as Alex and his ‘droogs’, on November 17 at the University’s Martin Harris Centre.

Although there is no music in Burgess’s screenplay, Dr Malone has made reference to the novelist’s popular stage version, performed by the Royal Shakespeare Company in 1990.

The play features other songs and music composed by Manchester-born Burgess, who graduated from the University in 1940 and returned in 1987 to receive an honorary doctorate.

Burgess’s screenplay was rejected by the director Stanley Kubrick, who wrote his own version for the film, which was released in 1972.

Despite critical acclaim, the award-winning film - which contained scenes of gang violence - was withdrawn from circulation by Kubrick between 1973 and 2000.

Dr Malone said: “Beethoven has been an important influence in the writing of this piece - and you’ll be able to ‘slooshy’ the Pathéthique, Tempest and Moonlight Sonatas as well as the Ninth Symphony.

“No doubt the lead character Alex himself would have approved of this reference to his musical hero, Ludwig van.

“But actually Beethoven is a hero of mine, too. I have been quoting from him in my own compositions for over 15 years.”

Anthony Burgess, who died in 1993, wrote 33 novels, 25 works of non-fiction, two volumes of autobiography, three symphonies, and more than 250 other musical works including a piano concerto, a ballet and stage musicals.

Dr Malone added: “I think and hope that Burgess would have approved of this, especially as his screenplay never the saw the light of day.

“And it’s fitting that after 50 years, this music will be first heard at The University of Manchester where Burgess himself once studied.

”Indeed Burgess, was brought up Harpurhey and Moss Side and is one our city’s proudest sons.”

Andrew Biswell, Director of the International Anthony Burgess Foundation said: “We’re very pleased to have worked with Kevin Malone and Manchester University on this project. We see it as a homecoming for Anthony Burgess and his most famous work, A Clockwork Orange. We hope that this will encourage other writers and musicians to work with our archives.

“Although Burgess spent much of his adult life living abroad, he never forgot his Manchester origins. When he was in Rome in the 1970s, he managed to introduce the word ‘Mancuniense’ (meaning ‘Mancunian’) into the Italian dictionary.”