The University has signed an agreement with KAIST, a leading international research university based in South Korea 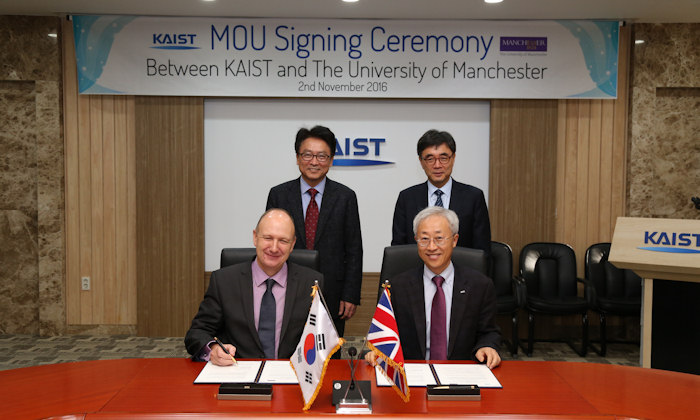 Manchester’s Dalton Nuclear Institute and KAIST have signed a memorandum of understanding based around their shared, world-class expertise associated with the nuclear power sector.

The two global universities share a number of research areas of interest in the nuclear sector where they have complementary activities, particularly in the areas of robotics for decommissioning, advanced nuclear fuels and pyroprocessing of spent nuclear fuel.

"It is very exciting to work with organisations such as KAIST because we have so many shared interests and can see opportunities in nuclear research for both partners," said Professor Francis Livens, interim Director of the Dalton Nuclear Institute.

The Dalton Nuclear Institute will be working closely with colleagues in KAIST’s Department of Nuclear and Quantum Engineering. The partnership will support four key areas:

The official signing ceremony was hosted by KAIST in South Korea and The University of Manchester was represented by Professor Colin Bailey, the University’s Deputy President and Deputy Vice-Chancellor.

KAIST – originally established as Korea Advanced Institute of Science and Technology – is a leading research university which has served as an international gateway to advanced science, technology and innovation.

The Dalton Nuclear Institute at the University is recognised as the most advanced academic nuclear research capability in the UK and is a leading centre for higher learning in nuclear science and engineering.

Through academic and industrial interdisciplinary collaboration, the Dalton Nuclear Institute plays a key role in providing the knowledge and skills needed to deliver a low-carbon future through nuclear energy. Its extensive world-class facilities and collaborative links help to drive innovation across the nuclear fuel cycle.

In the picture: Professor Colin Bailey, Deputy President and Deputy Vice-Chancellor, and Professor Hyunwook Park, Provost and Executive Vice President of KAIST, sign a memorandum of understanding between their two institutions based around shared interests in nuclear science.