Jane Acres from the School of Mechanical, Aero and Civil Engineering is the latest lucky prizewinner in the weekly Staff Survey draw - and the final iPad winner will be drawn this Friday (17 April) 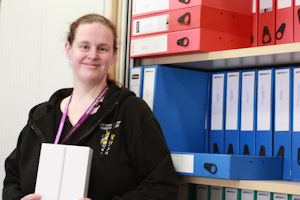 Jane, who is UG Programmes Administrator in MACE, was chosen at random from all of the people who have completed and submitted the Staff Survey 2015 since it opened on 9 March.

After joining the School as a receptionist in 2006, Jane moved up to her current position within a couple of years. Her role involves dealing with students and administration for the Mechanical Engineering course, including exam paper production, marks processing, registration week activities - anything, in fact, to do with student courses.

Since the Staff Survey 23013, Jane feels that the University has made real efforts to respond to feedback from staff and appreciates the increase in information about major developments on campus.

Capita, which is running the survey on the University’s behalf, will be choosing a winner each week the survey is live, from everyone who has completed the questionnaire.   So the sooner you submit your survey, the more chances you have of winning one of the five remaining iPads.

And Jane isn’t the only one to benefit from the Staff Survey 2013.

After completing the survey you can choose to make a £1 donation to one of the following charities:

There’s still time to complete the Staff Survey – it’s open until Monday, 20 April.  You should have received an email from Capita on Monday, 9 March with a link to the survey – it will appear in your email inbox as:

If you can’t find it, call Capita on 0800 587 3115 and they will resend you the link. If you don’t have email access at work, then your line manager will make sure you receive a paper copy of the survey to complete and return to Capita.