Support Conor's bid for the wall of fame

Conor Collins, from the Global MBA Assessments Team in MBS, has created a portrait of Alan Turing for The Molly House Street Art Competition 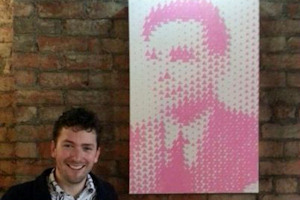 If Conor wins the competition, his portrait will be turned into a 20 meter mural on the wall of The Molly House bar and cafe on Richmond Street, Manchester.

The portrait is Conor's entry in the first large street art initiative in the Gay Village. The winning design is to be chosen by a panel of judges on 31 August and will be painted in September by a team of renowned street artists, including Kelzo and Hayley Garner.

The portrait was created using a few hundred geometric pink triangles, based on the label worn by the LGBT community in the Nazi concentration camps.

Conor explained: "I wanted to convey both Turing's love for mathematics and his homosexuality, which led to his being one of the most influential people of all time but also dying an early death as a result of depression and persecution.

"I began painting around four years ago during my second year of studying opera at the RNCM. Once I started painting, I couldn’t stop: soon opera began to fade and art took its place. I have painted for a couple of famous faces (Matt Lucas and Giorgio Armani) and I'm really hoping this mural might be my chance to make more of an impact on the Manchester art scene."

One of Conor's earlier works - a portrait of diver Tom Daley created from anti-gay tweets - caught the attention of the media and was reviewed in The Independent and Time.

You can support Conor by voting for his piece in the online survey at:

Scroll down to the first pinned post for links to the dropbox containing the shortlisted entries and to the survey (Conor's portait is number 4). Please don’t confuse his work with another piece which includes an image of Alan Turing: Conor's is the illusion created entirely out of pink triangles.